< Tatsunoko vs Capcom: Ultimate All Stars 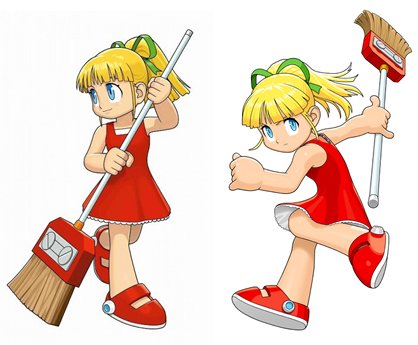 Everyone rumored, no one believed.

The comeback we were all yearning for.

Roll, truly the last and greatest Ultimate All-Star of our time, finally emerges from her brother's shadow in Tatsunoko vs. Capcom. Going from a virtually unplayable clone of Mega Man in Marvel vs. Capcom 2, so bad that even Servbot is more viable, Roll has been given her own original moveset based around her lethal housekeeping skills and her hi-tech broom.

Roll is a unique character in TvC. She's used mostly on anchor due to her strong assist and ability to control neutral with her notorious j.C. She can do situationally very high damage with 2 separate power up mechanics, but can have problems converting off of some hits. She is also the undisputed ruler of unburstable damage, with a number of OTG hits that can not be escaped.

In the corner you can loop: [3c,j.aabb 236c falling j.b] This gets tighter the more loops you do. You can also add enders like [j.aabb 236b falling j.b double jump j.bc] that add a bit more damage. Try to find a combo that you feel comfortable with

As roll, your biggest neutral threat is j.c. The disjointed hitbox combined with the fast travel speed and distance of Roll's air dash means it's very hard for many characters to consistently contest air dash j.c. You'll often be hitting this air to air, which doesn't net roll a conversion, meaning you'll often be using it repeatedly just to attempt to bully your opponent into blocking.

If you convince an opponent to block, Roll's offense can be pretty scary. Air dashing with j.A gives double overheads, so it can be used to open people up. If a grounded string is blocked, you can mix up between 6b and 2c in block strings, or go for pressure with 5b, a very rare plus on block normal in TvC. Be careful for pushblock, because it's trivially easy for a lot of the cast to whiff punish her strings if pushblocked.

If you finish a combo with roll, midair you should use 236c to guarantee a power up, if you get flying screen a j.c knockdown does not guarantee a safe charge. Not only does having the charge increase Roll's combo damage, it also gives her some additional no-baroque conversions, namely 6b, 236a or air-to-air j.a, 236a.