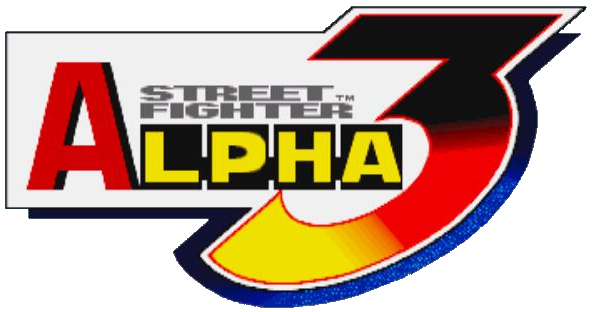 The third installment in the Street Fighter Alpha series from Capcom. Released in arcades in 1998 and taking place in the story one year after the end of Street Fighter Alpha 2, SFA3 features a new combo system, a mode-based Super Combo system, and a massive roster of characters (along with minor tweaks such as Air Recovery and a new way to throw). Faces such as Blanka and Vega returned along with 3 new characters (Karin, Cody, and R. Mika). Bison once again takes his place at the top of the ladder as the game's final boss.

The game made its way to home consoles in 1999 (first on the Sony Playstation then to Sega's Saturn and Dreamcast thereafter) where Capcom enhanced the game with more characters (bringing in Fei-Long, Dee-Jay, T. Hawk, and Guile as well as an "Evil" version of Ryu with some extra moves; which made a complete roster of characters from both the Street Fighter Alpha series and the Street Fighter II series (circa Super Street Fighter II Turbo)). In addition, Capcom also devised a mode called "World Tour" which could be described as a "Quest" mode of sorts. The player could take a character and compete in various challenges while they built up their stats (the mode was modified for the Dreamcast). Another mode of interest was Dramatic Battle, in which two characters could fight against one opponent.

In 2002, Capcom released the game on the Nintendo Game Boy Advance as "Street Fighter Alpha 3 Upper". This version is the first of two portable releases for this game so far. The Game Boy Advance version took out the World Tour mode but retained the other modes. It also took out many stages and music but in exchange, introduced 3 characters from "Capcom vs. SNK 2" (Yun, Maki, and Eagle). Then, in 2006, Capcom released "Street Fighter Alpha 3 MAX" for the Sony Playstation Portable. This 2nd portable release brought back the World Tour mode as well as introduced one new character in addition to the 3 added for the "Upper" version (Ingrid from Capcom Fighting Evolution). By and far, the most complete version, the PSP version of the game features everything from all the console versions before it (including the Dreamcast-modified World Tour mode) and includes wireless play for local matches.

Standing Block Hold b when attacked

Mid-Air Block Hold b / db when attacked while in air

GP Protection Block Block an attack just before it hits

Semi-automatic Block (Unsure of how this works)

...Neutral Breakfall Press PP when knocked into the air

...Front Breakfall Press f + PP when knocked into the air

...Back Breakfall Press b + PP when knocked into the air

Ground Recovery Press KK when knocked to the floor

Tech. Hit (Throw Escape) Perform a throw as you are thrown (air)

Counter Hit Hit someone while they make an attack

Hold Damage Increase As above, but use when you perform a hold

Hold Damage Decrease As above, but use when you're in a hold

Damage Reduction Press in any dir. + P / K when you are damaged (repeat during multi-hit moves)

+ Both ground and air recoveries.

+ Alpha Counters (these cost 1 level of the SC gauge and 1 notch of the Guard Power gauge).

+ Taunting (once per round only, excluding Dan).

+ SC gauge charges up faster than in X-ISM.

- Damage per hit is average (less than in X-ISM and more than in V-ISM).

+ Both ground and air recoveries.

+ Alpha Counters (these cost 50% of a full Original Combo gauge and 1 notch of the Guard Power gauge).

+ Taunting (once per round only, excluding Dan).

+ Determine which range of attacks the character uses (far or close), by leaving the controller neutral or holding it forward/back when a Punch or Kick is pressed (does not apply to the button used to grab nor generally apply to all characters).

+ Can only use Custom Combos instead of Super Combos.

- Damage per hit is lower than in any other mode.

- It costs half an OC gauge to use an Alpha Counter.

+ Longer Guard Power gauge length (so it's harder to get Guard Crushed).

- No taunting (except for Dan).

- X-ISM characters have access to only one predetermined, Level 3 Super Combo.

- Characters take slightly more damage from attacks (blocked or not).

Characters are listed with their best Isms. Historically, Anyone B class and above is viable in tournament play. According to a recent (2016) Japanese tier guide Current Street Fighter Alpha 3 Tier List