Street Fighter III: 3rd Strike is the last revision of the SF3 series, the two previous games being SF3: New Generation and SF3: Second Impact. The main differences found in 3rd Strike include: a new way of performing throws (done by pressing LP+LK), universal overheads (MP+MK), a "choose your opponent" approach to Arcade mode, the return of the "Crush the Car" bonus round, a new soundtrack, new stages and 5 new characters: Chun-Li, Q, Twelve, Remy and Makoto. 3rd Strike is considered by much of the competitive Street Fighter circuit to be the greatest fighting game of all time, let alone in the series, for it's depth, parrying system and unique, engaging roster.

Home versions of 3rd Strike can be found on the Dreamcast, PS2 and Xbox. The Dreamcast version was released in 2000 with slight differences to the arcade version. In 2004, Capcom released 3rd Strike as part of the "Street Fighter Anniversary Collection" for the Xbox and PlayStation 2 which also included Hyper Street Fighter 2. The current rendition is the port to Xbox 360/PlayStation 3 by Iron Galaxy, which was released with new features, extras and online play with GGPO. 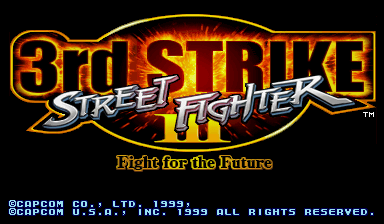