Ninja Master's was the sixth and final fighting game produced by ADK, following the four games in the World Heroes series and Aggressors of Dark Kombat.

It was later featured in the 2008 compilation ADK Tamashii for the PlayStation 2.

On December 6, 2012, Ninja Master's was also released on the Neo-Geo X handheld system. 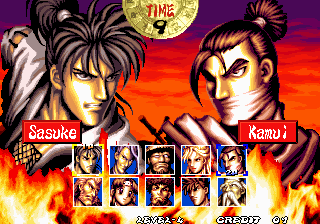