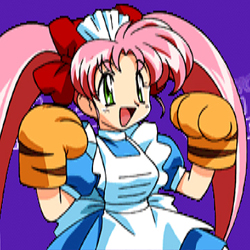 Manami doesn't know what a "martial art" is, but she's not gonna let that stop her.

Manami is a speedy mobility-based character who excels at a hit-and-run playstyle focused on annoying her opponent to death. Her ability to pester and harass the opponent with fast, damaging special moves is also helped by her small, awkward hurtbox, which causes some characters' basic juggle combos to whiff against her. However, it's no exaggeration to say that her weaknesses lie in everything about her outside of that -- she has the lowest defense value in the game, her normals all have pitiful range, she has no invincible reversal, and her status as a mobility-based character is hindered by the fact that she cannot jump out of a forward dash. You'll have your work cut out for you as this character, but hey -- your weaknesses won't matter if they can't catch you, right?

LP Guard Cancel leads to her combos, but her short reach means it can be baited. HK GC must be super-canceled, otherwise she's left open to punishment.

Neko Rocket Punch (qcf+P): Manami tosses one of her cat paws out on a string before pulling it back. This can hit opponents both on its way out and on its way back, but in either case it is extremely unsafe on block. On top of that, as well as its limited range, the move also deals one blocked fireball's worth of damage to Manami, because she's clumsy and she keeps hitting herself in the face with her paw. Because it's not a particularly useful long-range tool, this mostly sees use as a way to convert combos into EX attacks.

Goro Goro Attack ([b],f+P): Manami's version of a Blanka Ball, and appropriately, one of her most important moves. The LP version is mostly used for movement due to its slightly short travel distance (and very low whiff recovery), while the HP version is used for actually dealing damage thanks to its knockdown. Curiously, although the move is considered airborne from frame 1 (making it invincible to throws and causing an air reset when she's hit out of it), Goro Goro Attack is considered as a grounded attack on a system level, meaning it cannot be blocked int he air, and can also be super cancelled into grounded moves without any issue. The EX version moves at an upward angle, and while it can be blocked in the air, it is one of Manami's most damaging moves, making it very useful in combos.

Goro Goro Attack 2 ([b],f+K): After spinning on the ground like Sonic, Manami launches towards the opponent in an upward arc. The angle it travels at is fantastic, but it has two major flaws: it doesn't knock down like the first Goro Goro Attack, and it has dreadfully slow startup. Mostly used for pre-emptive space control.

Level 2
Gottsui Neko Rocket Punch (f,hcf+P): Neko Rocket Punch, but, like, really big. This super travels a set distance irrespective of where you are, so it's possible for this move to not make full contact with the opponent, causing you to lose out on a lot of damage. It also will not fully hit airborne opponents, also significantly decreasing the damage. Overall very hard to use, but it's good to aim for it when you can, since if it lands successfully, it is one of the most damaging supers in the game.

Ultra Goro Goro Attack ([b],f+HP+HK): Like Goro Goro Attack 2, but unblockable. Can be charged by holding down the buttons, causing it to deal more damage. Mostly used as something to make the opponent wake up into.

Manami wants to be as agile and difficult to catch as she possibly can, for two reasons: the first is that the range on her normals is catastrophically short, so there's not much point to standing around trying to play footsies. The second is that if she gets caught by the opponent, her low defense value means a single mistake can be fatal. To that end, Manami wants to spend most of her time harassing people in neutral with a combination of Goro Goro Attack and Banzai Attack to mess with the opponent's timing, as well as j.LK > j.HK chains for both approach and runaway. If she's able to establish offense up close, you mostly want to prioritise her highly rewarding normal throw and command throw. If Manami finds herself on the defense, she has to rely mostly on chicken blocking and guard cancels, since she has literally nothing else to help with her defense.