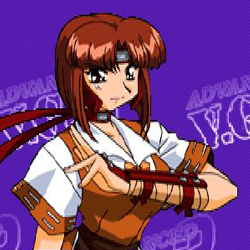 Chiho is a ninja, trained from birth in the ways of having bullshit custom combo supers.

An archetypical ninja character, Chiho is very speedy, sporting a set of fast normals, great mixup options and some of the best mobility in the game, which can be backed up by her excellent fireball. However, with speed comes fragility -- Chiho has a very low defense value, which means she takes punishment harder than most other characters. Her general damage output is also quite low, meaning you'll largely be trying to play carefully, scouting out openings and finding approaches with your fireball. This low damage output can be offset by her extremely threatening Zanei Jin combos, but the difficulty of these combos means that playing Chiho has a fairly high execution demand.

f+LK guard cancel is generally the most rewarding one to use, since it leads to strong combo follow-ups. However, depending on the move being gc'd it can be risky to go for, in which case the LP guard cancel will cancel into anything else you want.

Shisen Ken (qcb+P): Chiho's fireball. The LP version is exceptionally useful, as its slow travel speed makes it fantastic for covering grounded approaches and setting up annoying pressure strings in the corner. EX version throws three powered projectiles, but doesn't really provide enough benefits to be worth spending the meter on it.

SPECIAL Shisen Ken (hcb+HP+HK): More or less like throwing only one of the EX projectiles. Can be useful if you need something faster and slightly more durable in a fireball war, but not something you need to be worrying about a whole lot.

Enraku Satsu (hcb+HK while close): Chiho's command grab. A good option to have, especially since it leads to combos. Has two follow-ups.
-> Izuna Otoshi (hcb+HK~hcf+HK): It's an izuna drop. Adds on extra damage and leaves the opponent close to you if you choose not to use the final follow-up.
--> Senshuu Jin (hcb+HK~hcb+HK~hcb+HK): A final kick that tacks on some extra damage and knocks the opponent far away from you. Leaves them at a distance where you can reliably come in with a sj.LK, so whether or not you use it is up to you.

Zanei Jin (d,d+PP): Shadow super. Chiho gets stupid combos with this. She loses access to her normal throw and her command throw for its duration, but it's not a big deal since you get unblockables instead. Also of note is that Chiho's attacks still build meter while Zanei Jin is active.
Genei Jin (d,d+KK): Makes Chiho's movement and attacks faster for its duration. Not as useful as the other Genei Jin, and also not as useful as Chiho's other install super.
Shin Kuuga Zan (qcb,f+K): Fast super that tracks to the opponent's position, coming down on the opponent with a single attack. These two factors make it an exceptionally good tool for stuffing approaches and even anti-airing, but the trade-off is that the damage is the lowest of any Super in the game. Use carefully, because unless it will kill, your opponent may be okay with taking the damage if it means you're down two bars of meter.

Chiho is best suited to rushing the opponent down, using a mixture of fireballs, df+HK slides, dashing HP and j.LK to aggressively approach the opponent and establish pressure. This is important for two reasons: the first is that the generally low damage output of her normals means that Chiho will generally fare worse in a careful footsie game compared to most other characters. The second is that the reward Chiho gets from her pressure is high, since Hien Geki gives her combos exceptional corner carry. The corner is where the real fun begins -- not only do you have access to all of your other mixup options, but you also gain access to a very annoying pressure sequence of dashing HP xx LP fireball, which you're free to change the timing of in order to bait reversals or guard cancels, as well as your terrifying (and exceptionally meter-efficient) Zanei Jin combos. If you find yourself on the defensive, look for opportunities to wall jump away from the opponent, or try to land EX Hien Geki if you're comfortable spending the meter.

Zanei Jin Unblockables
Due to the nature of the shadows attached to Zanei Jin, Chiho is able to set up unblockables in the corner by activating Zanei Jin after scoring a knockdown, timing LP+HP so that the shadows hit meaty, and then following up with cr.LK. You can use this to make waking up an incredibly scary proposition for your opponent, but you'll need to properly adjust for the opponent choosing to quick getup or not.