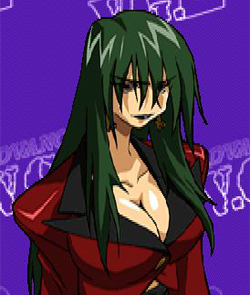 Saki will cut you.

Saki is a simple character with a simple gameplan: make you explode. Sporting solid aerial normals and a HK button that almost plays footsies for you, Saki is able to turn a good number of errant pokes she'll land during neutral into incredible damage with her supers, leading to combos that often deal upwards of 50% damage in one shot. This simplicity is both a blessing and a curse, however -- her lack of solid pokes not attached to the HK button leaves her ground game feeling fairly linear, and her reliance on two-bar combo conversions for her damage makes resource management a very important question for her.

Saki's best guard cancel is her HP guard cancel, since it's her command grab. When activated outside of grab range, Saki will simply maintain her blocking animation while becoming briefly invincible. This can lead to larger punishes that can potentially make up for the meter spent on the guard cancel.

Tetsu (qcb+P): A dashing claw swipe attack that's mostly used in combos due to its lack of safety on block. The EX version has invincibility until the first active frame, making it usable on defense.

SPECIAL Tetsu (hcb,f+PP): Same number of hits and damage as the HP version, but with the screen freeze and invincibility properties of the EX version. Is also a good deal safer than all other versions of the move, but it can't be cancelled into and it won't come out if you're in range for Ren or have meter for an EX Tetsu.

Ryou (qcb+K): An advancing flip kick kind of move. Good horizontal range, and it becomes invincible to lows from frame 1. Due to all the time Saki spends airborne during this move's animation, it can be difficult to punish, but the risk/reward ratio on this move doesn't lend itself to just throwing it out in neutral. The EX version does more damage, and is a fantastic juggle combo ender.

SECRET Ryou (hcb,f+LP+LK+HP/LP+HP+HK): A lot like EX Ryou, but with the exception that it has a much higher hit count and a low damage scaling value, which leads to it dealing dino damage -- in particular the LP+HP+HK version. It's very risky to throw out, but if you can manage to get all the hits, it'll be worth the effort. Curiously, this can be performed with less than 1 bar of meter, but if you have a bar of meter it will be consumed.

Sen (dp+P):A two-hit special that looks a lot like an autocombo of st.LP into f+HP, except it knocks down. The second hit is an overhead, and it's only slightly minus on block, which makes it hard to punish outside of fast EX specials or supers. That said, it's got pretty short range, so it's hard to use in neutral. The HP version hits four times compared to the LP version's two hits, so the HP version is mostly used for super cancels on the third hit.

Shoku (dp+K): Upkick special move. Has no horizontal range, no invincibility and a pretty poor hitbox in general, relegating its use mostly to situational combos. The EX version is much more useful on defense and even on offense, thanks to its 0F startup after superflash.

Ren (close hcb,f+P): A command grab, something that doesn't go unappreciated. All have 1F startup with no whiff animation (though you'll often whiff Tetsu, which isn't exactly ideal), with each version dealing different amounts of damage.

Homura (qcf,qcf+P):Saki jumps into the air before throwing out a massive pillar of fire a few steps in front of her. This super can also be performed in the air, where it becomes significantly faster on startup. The pillar is air-unblockable and deals a ton of damage, so while this super isn't used as often as Mizuchi, it's still useful in certain juggle combos as well as the occasional anti-air.

Mizuchi (hcb,qcf+P): A flipkick that leads into a devastating follow up hit. The final hit of this super deals fixed damage, and is the primary reason why Saki's damage is as high as it is. Only used in combos, but is incredible for that purpose.

Saki can get a lot of mileage out of just using her buttons to control neutral. On the ground, she can use far HK, cr.HK and f+HK to control the ground, while j.LK, j.HK and (again) far HK can swat people out of the air. With meter on deck, Saki can very easily blow people up for trying to stuff her aerial approaches -- conditioning them with aerial chains from jump-ins with j.LK can lead to you baiting and punishing potential anti-air attempts with Homura. This is much the same for people who try to approach by air blocking as well, since both far HK and Homura can beat those options. Once you've established yourself up close, you can run a pretty basic (but very scary) mixup between cr.LK > cr.HK hit confirms and your normal throw -- in either case, cashing your mixup out into HP Tetsu xx Mizuchi will deal around 50% damage to the opponent. However, it's important to be mindful of your meter, since Saki's primary defensive option is EX Shoku -- useful, to be sure, owing to its 0F startup after flash, but it does mean that you'll have to frequently be making decisions about how to use your meter, so try to be judicious when the necessity arises.

Basic Combos
Depending on the character and screen position, sometimes Tetsu will only hit once, which can make the super cancel more awkward to perform. In many cases you'll accidentally get EX Ryou instead of Mizuchi, which is still pretty decent damage.