+Hp fireball knocks down when done up close

-Ryu has the exact same normals as akuma outside of 2 NJ normals(only exception is damage/stun on some of them),His overhead is his only original attack since the Nj moves are shared with ken 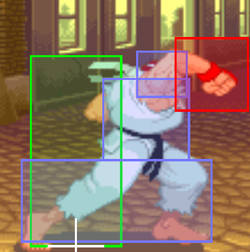 stand jab, jump strong
A simple juggle combo. Most likely after a blocked air to air hurricane kick. After this a quick stutter to walk underneath or not, to combo of your choice for a good chance of dizzying out right.

Duck lkX2/3 stand hp qcf+hp.
Highest dizzy combo(sodom with standing)on standing opponent. A jump into this will almost out right dizzy the opponent straight out. Also used for punishing rolls. Remember after a roll the opponent hit out of a roll is standing. So again, in most cases after a hard knock down even at the start of a match, into the above combo will out right dizzy.

duck lkXn, then at furthest point sweep.
A combo for when you stutter and forget to do one of the 2 above. Remember that duck mk does 1 point of stun. And you can get more damage and stun from just sticking with simple stuff. As many chains in light medium hard fashion actaully will do less damage and less stun then the above.

Jump hp,hk, stand mp, dp+hp.
A high damaging combo most likely used after a dizzy to finish off the opponent.

Besides akuma and guy, ryu arguably punishes rolls the hardest in the game. Duck lkX3, stand hp, fireball does 29 stun by itself.(it takes 40 to dizzy every character in the game)So if you landed a strong knock down, one roll punish could mean the match in your favor outright.