< X-Men: Children of the Atom

Character Overview: Cyclops is a shoto type character with his version of an uppercut and stylish fireball in the way of his HP and optic blast moves. A very beginner friendly character to play with a variety of tools and very good normals to help him contest with the stronger characters. His main game plan consists of controlling space with his oppressive air normals + double jump options and S.HP/Cr.HP to halt the opponents offense and slow the pace of the fight. In order to be strong with this character he requires some execution with his Crouch.Dash.LK plus Crouch Cancel HK in addition to knowledge of all his tools. If you are learning this game for the first time he’s a good character to pick up and play to get a feel for the game and stick with.

s.LP - A fast high hitting jab that can chain into itself for decent hit confirm damage
(Note that this move will whiff completely on small crouching characters such as Wolverine and Omega Red) 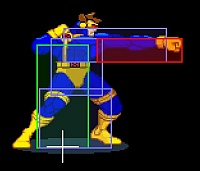 s.MP - A launcher with fast start up and very good tool for hitting those attempting a jump in or cross up due to the high hitbox on the end of the move.
This move is also very good for raising the opponents height in air combos.

s.HP - Shoots a projectile bullet. Recovery is long so cancel it with a special or SJ. Good for putting something in the opponent's way or forcing them to block.
(Note that even though this move seems like a projectile it does not do chip due to it still being considered a normal move) 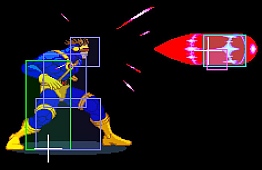 s.LK - A very useful neutral tool and poke to put the pressure on especially after a dash the range makes it useful to chain into itself or to sweep as a confirm.
(Note that this move will completely on whiff small crouching characters such as Wolverine and Omega Red) 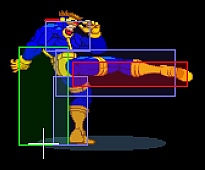 s.MK - Slower poke that doesn’t haven’t have a lot of utility but does cause a small launch that you can juggle after or confirm a special into from most ranges. Helpful for combo filler if the opponent needs to be lifted off the ground.

s.HK - A high damage normal with a deceptively active hitbox and good angle and range. This move is an important part of his kit due to the ability to crouch cancel.

(Note: HK canceling- The action of using Cr.HK to cancel the recovery frames of your St.HK allowing you to combo multiple St.HKs it sounds difficult but the easiest method and most consistent way is to hold forward while doing heavy kick then move the stick to down forward press heavy kick again. You alternate between these two inputs to get successful crouch cancels)

S.HKx2 Additional Input - (Second Image) After pressing HK press it once again to get the air version of HK if this move does hit you can cancel this into super jump for an air combo. (Note: this move is able to completely beat certain low moves) 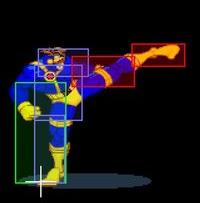 j.MK (neutral) has potential to hit behind airborne opponents, crossing them up AND unblockable frames entirely. Most useful after a Gene Splice. Seems to hit larger characters more easily. It's juggle properties on the way up push higher than on the way down of a jump (or SJ). 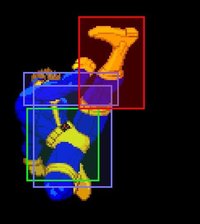 c.HP See above, better for space control against pixies and low dashers.

Tech-Hit:
On both techs, Cyclops is invincible until landing, and unable to do any action. This lack of mobility upon tech makes you vulnerable to counter-thrower/tech traps if you are out-metered. Possible escape is holding up/p-back so you jump immediately on landing. Reversal Gene Splice can still be thrown if the throw is timed perfect to the frame (unlikely, but still a risk).
Against non-counter throwers or unmetered ones, you can try to use your invincible landing frame to beat out their throw, provided they don't outrange you.

Running DDT Throw F,F, HP+HK
Long startup, long recovery (miss or hit), grab range during the run is fairly short. Very limited uses. You could throw it in as a surprise reset during a low corner juggle, but chances are they can hit you before they land. Can't grab out of the air and shorties can crouch it!

Mini-Combo F,F, LP+LK (starts out with 2 hits, keep tapping for up to 6)
Combo looks like stand jab-jab, stand short-short (these start the juggle), c.MP, s.HP.
Cancels normals, good for some combos and pressure.

Mega Optic Blast D,DF,F + 2P (ground only)
Can be comboed into with specific setups. The recovery on this makes it a bad idea to chip vs fast characters.

Super Optic Blast D,DB,B + Punch (ground and air, controllable directions, can reflect off of floor)
Recovery on the ground is similar to the MOB, so it's a much better idea to use in the air, where recovery is less (or harder to take advantage of). Easy to combo into as a juggle.

Some terms:
Launcher - Gets the opponent into the air.
Aircombo - Air to air hits while super jumping
Juggle - Ground to air hits or normal jumping hits
Stabilizer - If opponent is "slipping out" of the combo, this should bring them back in to the proper positioning.

∗ depends on weight/OTG time, this part doesn't work on everyone
∗ ∗ can repeat dash c.LK and can also chain a few non-dashed ones
A slight delay from the last c.LK to c.HP brings you a little closer, and tends to ensure you won't miss all the hits of a mashed HP gene splice.

∗ bottom of your "flash kick" should be what hits him.
∗ ∗ Some may need this ommited.

You can use :mp: throw as well. This may net more damage, but it also takes more hits afterwards to dizzy. Throwing straight up is easiest.

If the turnaround s.:hk: is confusing your gene splice, or the jumpin hit is too hard on Sentinel due to his short OTG time, try this instead-

example... Cyke vs Cyke: dash c.mp, c. mp (jump toward), [j.hp, j.hk] x2, j.hp, j.mk, (land), c.mp, repeat jump juggle. In above example, if c.mp misses as a re-juggle, you were probably too close and it went behind them. Let go of toward as you're landing. If they remain high enough, a landing rejuggle isn't needed. If they're getting too high, SJ up for an air combo.

Repeating low juggles (these can be infinites, but minute changes in positioning and timing makes them very likely to break, walking forward as much as possible lessens the amount you need to re-dash in)

s.HP and c.HP bullet to control space on the ground. You can cancel this to a super jump and throw out downward pokes right away, or wait and see what they do to get around the bullet before doing anything. Come down with downward HP or HK as those attacks are extremely hard to anti air.

After a Gene Splice that pops them up, go up after them with sj.MK to try and hit the unblockable frames.