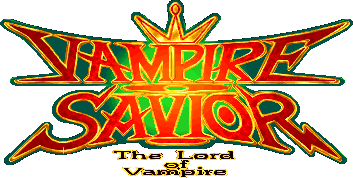 Vampire Savior - The Lord of Vampire (a.k.a. Darkstalkers 3 in the USA) is the third incarnation of the Darkstalkers series. It was released in 1997 and much of the game mechanics have been borrowed by Capcom's later Versus series. The game can be extremely fast paced, especially at high level competitive play, and in its nine years of life so far it remains pretty well balanced. 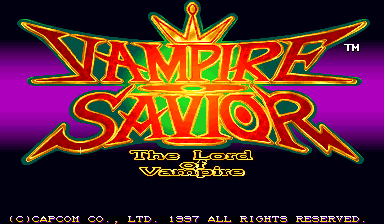 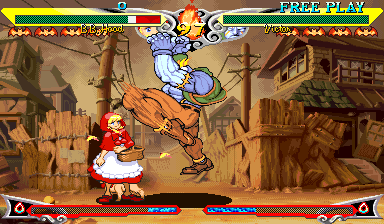 Throughout the guide there will be a lot of jargon thrown around and, unless you know what these terms are referring to, it might be difficult to understand some of the more complex lingo and slang used. For example, what is Hit Stun and Block Stun? What do we mean when we use the word "frames?" So before we begin, please take some time to look over the glossary to familiarize yourself with some of these terms so the rest of the guide will make more sense.

The Life Bar works quite differently from your average 1 on 1 Capcom-Styled Lifebar. The normal nature of the lifebar is, you get hit, and the damage stays. Vampire Savior doesn't follow this trend. Rather, damage is dealt in Red(Permanent damage), and White(recoverable damage). While there's not much to talk about as far as red damage goes, there's a bit to know about white damage.

I'm 99% sure that every damaging move in Vampire Savior causes white damage. The ratio of white to red damage increases with the length of the combo being done(big combos equal lots of white damage). But white damage, is still damage. You can lose a round, if the white damage reaches the end of your life bar

Reducing your white damage [to just red damage] is quite simple; stay out of hit or blockstun. Being in blockstun (blocking in layman's terms) halts the reduction of your white damage. This can be best done by either: a. running away b. rushing down.

Capcom has followed two trends as far as life points are concerned. In their past [and later] games, characters within their [Capcom's] games have had two main ways of varying life bars:

As of now, I believe characters have varying defenses, with uniform life points. It has been stated from a source, that [all] character in the game have 144 units of life, which supports my initial notion.

Following in suit with life bars, Vampire Savior strays away from the generic round system. Your standard match gives each character "bats," which are essentially stocks of life. When you fill a lifebar with full damage, the match pauses briefly, a bat is taken away, then the match resumes.

The opponent who didn't lose a bat (there are cases where traded hits cause both opponents to lose bats simultaneously) is free to run about to setup wakeup mindgames, and heal white damage in the [very] brief intermission.

And of course, the match is 100% over when a character loses both bats. Double KO can happen.

Every character in Vampire Savior has up to 99 levels of meter. Despite this fact, except in special cases, you should really have no more than 3 levels of meter in a higher-level match (It's somewhat of a sign that you don't know how to use your meter).

There are three forms of doing combos in Vampire Savior:

You CANNOT cancel a normal move during a chain into a special or super move. You CAN link from a chain combo into a normal (or Special) move, thus allowing you to cancel that normal (Provided it is bufferable.) into a special move.

Another special case with canceling chain combos are command input EX Moves. These Supers are done by inputting odd commands in sequence. As such, characters such as Gallon (Talbain), Demitri, Morrigan, and other characters can cancel a chain combo into one of their EX moves.

Air blocking is a bit different. Much like Street Fighter Alpha 3, an airborne character cannot block a normal attack from an opponent who has their feet on the ground. However, some normal moves, such as Aulbath (Rikuo)'s s.fp, or B.B. Hood (Bulleta)'s s.F+mp may be blocked in the air, as well as all ES and EX moves. Air blocking also has virtually no blockstun, allowing for characters to retaliate instantly.

EX moves are the "Supers" of Vampire Savior. But unlike other Capcom games, the Supers of Vampire Savior are merely unique special moves. They have no invincibility, and may not necessarily have high priority. Normal EX moves are performed with their own motions, and two punches or Kicks. Command input (Or Sequential input) EX moves require their own combinations of directions and attack inputs.

Dark Force (abbreviated "DF" for short) is a mode that every character has available. It is activated by pressing the punch and kick buttons of same strength (light punch with light kick, medium punch with medium kick..etc). A DF requires at least one level of meter (Certain DFs require two or more), and adds additional effects and states unique to each character. The DF mode increases regeneration of white damage, but makes all damage taken and dealt during that mode red (permanent). Many of these DF effects can be generalized into 5 different categories:

Guard Canceling is the Alpha Counter of Vampire Savior. It is performed while in blockstun, and only on the ground. The command motion for any Guard cancel is:

while in blockstun. All guard cancels have frames of invincibility. The attack button (punch or kick) varies with the character, and is listed in each character's respective guide.

A guard cancel can be buffered in to, if a player can properly predict the need to block a move correctly within a 14 frame window. This is done by performing the motion, blocking, then immediately pressing the attack button to finish the guard cancel input.

Also known as pushblocking(Or Advancing Guard for the MvC players), Tech Hitting is performed by inputting anywhere from 3 to 6+ attack inputs during block stun within a 12 frame window. It can only be done on the ground.

It pushes the opponent away a distance, depending on your last input of the tech hit. A strong button will push them far away, and a weak button will do the opposite, pushing them far away enough for you to dash at them and retaliate. There is a random success in executing a successful tech hit.

Tech hitting gives the person teching frame advantage. This trait of tech hitting makes it more desirable in some cases over guard canceling.

Also worth noting, is that buttons pressed simultaneously count as only one (1) input toward a tech hit.

(Important note: Anakaris is the only character in the game that can't pushblock.)

Throws are performed by pressing the direction forward or back and P or K. Only Medium and Heavy punches or kicks may perform normal throws.

Throw Tech Hits counter throws. In this case, they are performed in the exact same manner as the throws: press the direction forward or back and P or K. Only medium and strong punches or kicks may counter normal throws.

I also do not have the frame data for these either currently, but from experience, the Vampire Savior engine allows for much leeway in performing a tech hit to counter throws. Very much like Super Street Fighter II Turbo.

All normal throws have a 1 frame startup(And Anakaris doesn't have normal ground/air throws).

All characters also have an unblockable command throw of some sort. All of which have their own respective command input, and frame data. These command throws are un-techable(with few exceptions).

Upon knocking down your opponent, you have the option to add an extra hit to your opponent with a pursuit. Pursuits deal strictly white damage, but even white damage may be all that is necessary to apply damage to maintain pressure.

To perform a pursuit, simultaneously press up and a punch or kick (U+P, or U+K).

Pursuits can be ES'd, by performing the command with two punches or kicks. They can also be avoided by strategic wakeups. This should not deter players from using pursuits though, since a missed pursuit will still keep you near your opponent, which may be desirable for many characters.

Pursuit Frame data will be listed with their respective characters.

Upon 'being knocked down, press left or right, and an attack input. your character will then move left or right(depending on which direction you held).

This allows for you to evade pursuits, keep on (or away from) your enemy, or just throw off their mind game.

Dashing is performed by tapping forward [or backward] twice in in consecutive succession. Doing so, makes your character dash, hop, or glide (depending on your character). This is a necessity to the game of every character in Vampire Savior, as is discussed further.

Frame data for dashing is located in each respective character's page.

Refer to the Strategy Section.

Data gathered via Artmoney and memory examination while the CPS-2 arcade game was running. Characters Oboro Bishamon, Gold Lord Raptor and Dark Talbain have the same walk speeds as their base characters. Raptor's crouch walking speed is the same as his regular walking speed.

(No particular order within each category. As unbiased as possible and taken from varying sources. Can be further divided, but resources currently not at hand)

many tidbits & just about all of frame data was found from thhese sites:

English translation by a brasilian

if someone would be so kind as to translate the name of it, that would be nice.