Night Warriors - Darkstalkers' Revenge (a.k.a. Vampire Hunter in Japan) is the second installment of the Darkstalkers series.
Released in 1995 for the arcade and later gaining a home release on the Sega Saturn in 1996. Other editions include the Japanese only release of Vampire: Darkstalkers Collection for the PS2 and the digital release of Darkstalkers: Resurrection for XBL and PSN (disc copy available only on PS3 in Japan).

For those unfamiliar with the original Darkstalkers title, Night Warriors changed alot. The original Darkstalkers had a s super system more akin to early KOF games or the S-Groove from the CVS2. Once the super gauge was full it would start to deplete and you had a limited time to execute a ES or EX move. In addition, while your super gauge was depleting inputting a special move would result in a ES move. You could not stock levels of super gauge and your gauge would reset at the beginning of each round.

Chain combos also worked differently in that you could not alternate between positions and punches and kicks. It was very straight forward (Ex. Standing LP, MP, HP) and you could cancel chain combos into specials, providing the normal your cancelling is cancellable on its own.

The overall game speed was slower, there were no pursuit attacks and the presentation including character artwork, music and backgrounds were different. 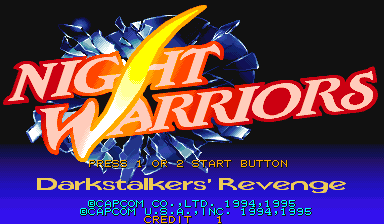 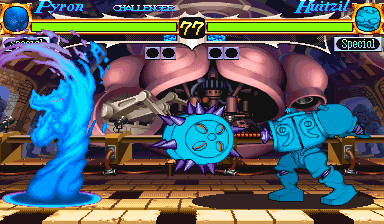 Changed from Darkstalkers 1 to a more "common" style meter system, super meter no longer depletes when not in use.
You can whiff moves (normal and special) to gain meter, but getting hit does NOT give you meter (it does in VSav/DS3).
You also gain a minute amount of meter for blocking attacks. Unlike in most games, whiffing light attacks also gains meter, but you cannot rapid fire to gain meter (Ex. LP,LP,LP,LP) that will equate to whiff one LP, instead you have to whiff more like (LP...LP...LP...LP).

While a Double KO or Draw usually requires one more round be played in other games, here it counts as a win for both players. This means if one person has a victory in Round 1 and the 2nd is a draw/double KO, that person wins the match (if it's best 2 of 3).

Projectile Battles:
When two projectiles (eg, fireballs) clash, they "fight" for dominance instead of just cancelling each other out. Which one wins is based on strength of attack used and timing of it's launch.:
-"Weaker" projectiles lose to "stronger" ones (eg, LP fireball losing to MP and so on), unless the weaker one is thrown after.
-Projectiles of the same strength thrown at the same time will cancel each other out.
-ES'd projectiles will go through normal ones, and EX projectiles override any other type of projectile.

There are three forms of doing combos in Night Warriors :

You CANNOT cancel a normal move during a chain into a special or super move. You CAN link from a chain combo into a normal (or Special) move, thus allowing you to cancel that normal (Provided it is bufferable.) into a special move.

Another special case with canceling chain combos are command input EX Moves. These are done by inputting odd commands in sequence. As such, characters such as Anakaris , Morrigan, and other characters can cancel a chain combo into one of their EX moves.

NOTE You cannot do chain combos in the air

Air blocking is a bit different. Much like Street Fighter Alpha 3, an airborne character cannot block a normal attack from an opponent who has their feet on the ground. However, some normal moves, such as Donovan's F+HK may be blocked in the air, as well as most special, ES and EX moves. Air blocking also has very little blockstun, allowing for characters to retaliate instantly.

Guard Reversal is the Alpha Counter of Vampire Hunter. It is performed while in blockstun, and only on the ground. (Exculding Phobos/Huizil who can GR in the air also) The command motion for a Guard Reversal is different for every character

Most guard cancels have 33 frames of invincibility. The attack button (punch or kick) varies with the character, and is listed in each character's respective guide.

A guard cancel can be buffered in to, if a player can properly predict the need to block a move correctly within a 7 frame window. This is done by performing part of the motion before blocking, then immediately finish the motion and pressing the attack button to finish the guard reversal input.

**Also important to know, is that guard cancels do not always guarantee a clean hit.

Anakaris does not have a Guard Reversal

Both ES and EX Moves require at least one bar of meter.

EX moves are the "Supers" of Vampire Hunter. But unlike other Capcom games, the Supers of Vampire Hunter are merely unique special moves. Most have no invincibility, and may not necessarily have high priority. Normal EX moves are performed with their own motions. Command input (Or Sequential input) EX moves require their own combinations of directions and attack inputs.

Throws are performed by pressing the direction forward or back and P or K. Only Medium and Heavy punches or kicks may perform normal throws. (Air throws are all done with MP or HP only)

Throw Tech Hits counter throws. In this case, they are performed in the exact same manner as the throws: press the direction forward or back and P or K. Only medium and strong punches or kicks may counter normal throws. Throw Tech hit command must be input within 7 frames of being grabbed to Tech. Throws that have been tech hit deal half damage and allows the one thrown to immediately land on their feet

All characters also have an unblockable command throw of some sort. All of which have their own respective command input, and frame data. These command throws are un-techable (with Victor's QCF+ MK or HK being the only exception)

Upon knocking down your opponent, you have the option to add an extra hit(s) to your opponent with a pursuit.

To perform a pursuit, simultaneously press up and a kick button (U+K)

Pursuits can be ES'd, by performing the command with two kicks for extra damage. They can also be avoided by strategic wakeups. This should not deter players from using pursuits though, since a missed pursuit will still keep you near your opponent, which may be desirable for many characters.

Pursuit Frame data will be listed with their respective characters.

Some Pursuits can be landed more than once.

Upon being knocked down, press left or right, and an attack input. Your character will then move left or right(depending on which direction you held).

This allows for you to evade pursuits, keep on (or away from) your enemy, or just throw off their mind game.

Dashing is performed by tapping forward [or backward] twice in in consecutive succession. Doing so, makes your character dash, hop, or glide (depending on your character). This is a necessity to the game of every character in Vampire Hunter, as is discussed further.

Frame data for dashing is located in each respective character's page.

Victor cannot dash unless he using the Great Gerdenheim EX

Yes, VARIABLE, as in different, or changing, blockstun. At first, the conventional Street Fighter player may say "This does not help my game". BUT it does in Vampire Hunter, which has the ever looming guard reversal waiting behind each blocked hit.

As such, when rushing down, you actually want to leave holes small enough to allow your opponent to falter in GCing (Guard canceling). All done, while keeping holes from being big enough for them to knowingly retaliate and thus possibly changing momentum of the game to their fancy.

Some characters thrive on these holes, for landing hits, while others merely have variable pressure as just an addition to augment their rushdown.

Most people in the fighting game community know chicken guard is jumping at the opponent, and blocking in midair. In Vampire Hunter the jumps are flexible enough that you can chicken guard an attack, and if there's sufficient space between that first hit you blocked and the next one coming (i.e. lei lei's j.hp, which doesn't give you much time) you can cancel the (air)block stun, and hit them w/ something... OR, if they've stopped all together STILL have the option to air dash and retaliate. VERY handy. Beware that it be countered by being thrown of course, fast air links, and anti-air normal and special moves.

I came up with the term for the acronym. You dont see many other fighters that can use it the way this game does. It's basically, jumping and doing an early move i.e. talbain's j.mk. as the j.mk ends(even if you wiff), you throw a j.hp/j.hk on. So essentially, you have some attack out for most of your jump. Also, if the second hit hits, its likely to going to be a deep hit; allowing for a followed up ground combo. for some characters, this becomes a useful method for them to prevent the opponent from dashing in to attack you when not much is happening(i.e. Rikuo/Aulbath). Some DAP attacks can also link together to allow combos on grounded opponents or to apply pressure(DAP pressure)

**It is important to learn the different types of DAP pressure.

1995/03/16: Final Japan Revision (All other versions including later World reigon verisons are based on this version)

Gallon's ES wild circular will use up all levels of meter

Felicia's ES hell cat will use up all levels of meter

Aulbath's ES Crystal Lanser will use up all levels of meter

Aulbath's ES Sky Neptune will use up all levels of meter

Pyron's ES Planet Burning will use up all levels of meter