Marvel VS Capcom: Clash of Super Heroes is a crossover, tag-team fighting game developed by Capcom, and released on January 23, 1998, developed for the CPSII Arcade board. It is the third game in the Marvel VS Capcom video game franchise, and the fifth overall Marvel fighting game developed by Capcom, serving as the sequel to Marvel Super Heroes VS Street Fighter. The game features a playable roster of 21 characters and 22 assists, split (mostly) evenly between the two companies. Much like its predecessors, and unlike the games that came after it, MVC1 features 2-VS-2 tag-team fighting gameplay, rather than the 3-VS-3 gameplay the series is well known for. In addition to this, assists are no longer teammate based, but rather based on a separate roster of characters who each have a unique function, distinguishing them from the playable roster. MVC1 also added the additional feature of Duo Team Attacks, where both player characters come out to attack for a limited period of time until their meter runs out, distinguishing it from the team supers of future Marvel games.

Marvel VS Capcom EX Edition, as it is known in Japan, is the PlayStation 1 port of the game. It is considered inferior to the arcade version for the reason that it removes the tag-team mechanic altogether. While it offers a mode under the name of "Cross Over" mode to give tag-team functionality, teams must be identical to one another in this mode, serving as a compromise to the PS1's small memory size. Therefore, the arcade version is vastly preferred over the PS1 port.

The storyline is loosely based on the X-Men: Onslaught arc from the Marvel Comics continuity: following an incident in which mutant telepath Charles Xavier was forced to enter into the mind of Magneto, part of Magneto's anger slipped into Xavier's psyche, and after merging with Xavier's darkest emotions it spawned a powerful psychic entity known as Onslaught. The game expands on the story by having Xavier's conscience calling forth heroes from the Capcom universe in order to help stop him.

Why Play Marvel VS Capcom 1?

Are you sick and tired of all the death combos in MVC2 and UMVC3? Do you want a more digestible but still challenging Marvel VS Capcom experience? Don't like what Marvel VS Capcom Infinite brings to the table? This is the game for you, then. Now no, this game doesn't outright have zero death combos, there's still plenty of infinites and high damage death combos here and there. But like Infinite, you're far more likely to deal set combos and fishing for hits rather than rushing to steal the first death. The game gives you room to breathe and play a more unique midscreen game where combos are finite, while still providing the Marvel experience of tight gameplay and frantic chaos. 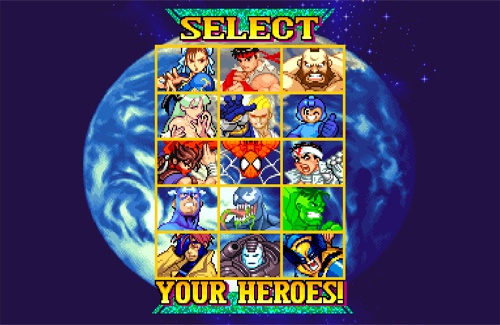