Darkstalkers: The Night Warriors is the first game in the Darkstalkers series released by Capcom in 1994. After a lot of SF2 revisions and a failed sequel of Saturday Night Slammasters, Capcom decides to bring the iconic creatures of the night in a fighting video game to see who's the best. 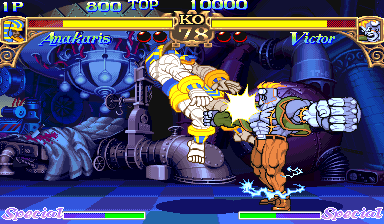 The main objective in the game is about defeat your opponent with Chain Combos, this consist in connect a weak normal and sequently cancel it with a medium and a strong normal .

The rule is simple, you can only cancel an attack.

Each character has a bar at the bottom of the screen (labeled SPECIAL) which grows each time the character attacks (or throws) his/her opponent. Even if an attack misses the special bar will increase slightly. During the course of the fight the level in the "special" bar will slowly decrease -- you must continually attack in order to get a full meter. Once this has happened, the meter will begin to drain very quickly and the word "special" will start to flash.

At this point, the character will gain some important powers: most special moves are enhanced and special "power" moves become available. After one of these moves is executed the "special" meter will empty and must be re-filled.

In DarkStalkers it is possible to block attacks in mid-air. Jump at your opponent, hold the joystick away from them, and you will block any anti-air attacks they try to unleash. Please note that you cannot block a non-projectile attack from a character whose feet are still touching the ground.

Also, characters in DS have the ability to attack multiple times in the air. When you use certain (generally weaker) jump attacks, you may be able to interrupt the first move and throw another jump attack (or two!) within the course of one jump. This ability opens up some new possibilities: certainly you can throw the second attack to avoid a sac- throw, extra combo hits are possible, and multiple jump attacks (when combined with some air blocking) can make for great fakes.

Furthermore, characters in DarkStalkers can launch any air attack they want so long as they aren't already in another animation. With the exception in the previous paragraph, as long as your character isn't attacking, blocking, or reeling from a hit, they can launch any desired attacks. This effect is especially noticeable when an airborne Anakaris player uses many weak or medium attacks during one jump.

Unlike other fighting games, in which two colliding fireball-type attacks cancel each other out or pass right by each other, DarkStalkers features a new missile attack priority system. Each projectile has a certain momentum which is equal to the maximum possible distance minus the distance travelled.

When two projectiles collide, the respective momentums cancel out and if they aren't equal, the projectile with left-over momentum will continue flying across the screen.

Of course, if a projectiles momentum is zero (i.e.: it has traveled its maximum distance) it will disappear. If you are using Sasquatch and you throw a weak big snow at an oncoming fierce chaos flare from Demitri be careful -- you may have to block the chaos flare anyway. Note that enhanced Special projectiles have extra momentum and Sasquatch's big freezer cancels out everything. ^_^

After blocking an enemy's attack your character will briefly suffer from a condition known as "block stun." (Ming's wording here) Generally, it is not possible to use any attacks until the block stun has worn off. It is possible, however to cancel the block stun directly into certain special moves. This is known as block cancelling.

Block canceling can be easily achieved while blocking a multi hitting move or a combo. Note that only the following listed special moves can interrupt block.

Timing for block cancelling is critical. After inputting the command for the special move the attack button should be pressed just as your opponent's attack comes into contact. Interrupting single blocks is possible too, one way to do it is to input the command for the special move before the comes into contact, then hit the attack button as soon as you block. When using Demitri or Morrigan, try: dp + [Wait and block attack] Punch

The second way to interrupt single blocks is to input the command for the special move as soon as you block. This seems only applicable to special moves with simpler motions such as Giga Burn, or Sand Splash.

In practice normal move cancelling is usually timed out by the player. At speed 1 small attacks are usually interrupted 1/3 of a second after the button is pressed, and medium attacks are usually interrupted 1/2 a second after the buttonpress. Note that if the attack button is pressed too early your move cannot be cancelled, so tapping buttons rapidly won't work.

Bosses are only avaible at Darkstalker Chronicles