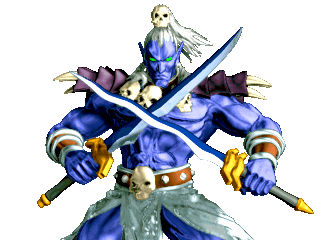 Vritra is, hands down, THE most agile character in the game and can easily bounce off the walls of the stage, attack his opponent, then leave and come back for more. He also has numerous dodging special moves and a very intimidating mixup game that grows more and more frightening with the knowledge that he can start an infinite with relative ease. While Vritra is not a character meant for beginners, a skilled Vritra player is a force to be reckoned with.

Vritra's only fair matchup is against Nagar. He has no disadvantage matchups.

A savage thrust forward that's the same animation as 646A, that can spell instant death for your opponent near the corner. A successful wall-bounce can lead to 646X follow-ups or the use of Vritra's 669D wall-kick which can be used to start his infinite. Downing an aerial opponent opens up the ability to 2D > 236D, which can be used as a cross-over and can be difficult for your opponent to react to. Standing mid-screen opponents are less susceptible to this tactic, but a similar method can be employed.