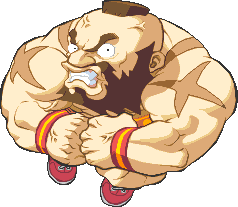 Zangief is a very powerful character, with really good normals. He can either play rushdown with his tick throws, Spinning Pilediver pressure, and amazing jump-in button, or play a zoning game with his good ranged normals like his 5K or 2P. His one frame grabs make him a menace to fight against and he has really good confirms for big damage. He takes a while to get used to as he plays differently than most of the cast but once you get to know him, you can start doing some nasty stuff. He is a high tier character due to the reasons mentioned above, and due to Pocket Fighter not having chip damage, you can play more patiently. In this page is some info I hope you might find useful to take a look at as to help your gief play. Zangief also starts with a rock, which can be thrown to petrify your opponents for a short period, making this time perfect for a special, combo, etc. However keep in mind your opponent cannot be grabbed while petrified.

+Great Range on pretty much anything

+Great Damage once he gets in

-Has Trouble getting in

-His Special Moves are more of counter moves than combo moves, making them not as used in game as other characters

5P - Your basic combo starter, if not a tad slow.

5K - A kick that does good damage and is a pretty good poke.

5S - Armed in construction equipment, Gief whacks them with a pickaxe. Holding the attack will make them drop gems. Hold it to max length for a guaranteed chest. Launches.

2P - Pointed jab with fingers, not a bad option for a tick grab.

2K - A low kick that also links into his super "Russian Beat". Not a bad poke either.

2S - Gief whips out a ring bell from god knows where and whacks the opponent right in the face for a launcher.

j.K - THE air-to-air. The hitbox is very juicy and will beat out most air buttons.

3P - Gief lifts his fist in an upward angle. Can work as an anti air.

3K - Almost identical in appearance to 2K, but he slightly extends his leg further. It's much slower however it knocks them down.

6S - Donning his "Red Cyclone" outfit, Zangief picks up a folding chair and thrusts it into his opponent. It's slow and telegraphed when done raw, hold for a guaranteed chest and more damage.

j.2P - A belly flop. Can work as a jump-in, and to hit anyone foolish enough to be under you. Absolutely your best jump in, and crosses up regularly.

j.2K - Zangief bends his knee down slightly while in the air, making it a decent jump-in.

Usually I would avoid doing the last hit of the combos... unless doing some nasty mix-ups. Find something you're comfortable with.

PPPP "Evolution Combo" - Zangief teaches you a quick lesson on the evolution of man; Dealing blows as an Ape, A Neanderthal, to Cro-Magnon. Note the final hit will launch, but it's blockable. Avoid using the final hit unless your opponent has been conditioned to parry/stuff your enders out.

PPKK "Pickax Combo" - Gief goes into construction uniform and hits the opponent with a jackhammer, ending with a pickaxe blow. You can go through the "Evolution String" and end with this one. The final hit is a Guard Crush, similar to his 5S. Useful for mixing up if your opponent blocks after the chain, avoid using if the opponent starts parrying. The third hit is actually a low hit, which is very useful for mix-ups and it's a good confirm.

PKPP "Dinner Table Combo" - Gief goes into his Casual outfit, and hits the opponent with a table. The final hit is a slightly telegraphed grab, that once connected, the opponent will have a seat with Zangief, where he orders a meal until it arrives. He then tears the paper in half and flips the table, launching the opponent far away. Useful if you condition your opponent to block, although the grab whiffs at certain ranges. Avoid using the third hit.

PKKK "Cossack Combo" - Donning his soviet outfit, he goes into a quick Russian kick dance, all over his opponent. In the final hit, he will do a quick hop with his knee, that will knock down the opponent if it hits, similar to his 66K. PKK is useful for tick grabs and other setups. It's fast and leaves space for a FAB even.

Input 6/4 + P + K "Hammer Throw" - Zangief pushes the opponent into the direction that was inputted before taunting. The opponent will hit the wall and get bounced back.

Input 2 + P + K "Pilediver" - Gief performs a mini version of his Spinning Pilediver, not lifting up, instead knocking them into the cold hard floor. It deals decent damage.

(Mid-Air) j.22P - Zangief turns into solid iron and drops down on a belly dive, squishing the opponent flat until they recover.

6321478 + P + K or 4123698 + P + K "Screw Pilediver" (Red Gem)- Zangief's signature Pilediver, he grabs the opponent, brings them up in the air, before throwing them back into the floor. it's a very damaging command grab. Levels 2 and 3 makes him fly with the opponent higher and higher, doing obscene damage the higher your level. Useful after forcing the opponent into the defensive.

P + S "Double Lariat" (Yellow Gem)- Zangief's Lariat. You can actually move during this special, albeit slowly. The higher the level, the more damage and stun it will deal, and the stun on it is already very good. On levels 2 and 3, the first hit will launch them for a few more hits.

23623 + K or 623 + S "Russian Beat" - Zangief goes on a multi hit dance all over his opponent. This is a decent enough super although the range is very weird. No I-Frames on super flash, meaning it can be stuffed out. Links out of PP chain or 2K. Does the lowest damage out of the 3 supers but has the biggest combo potential.

214214 + P + K or 42136 + S "Heavy Bite" - Gief jumps and attempts to catch whatever is in front of his jump arc. Once he catches the opponent he delivers a multi hit bite flurry dealing a bit of damage. Has I-Frames on the super flash, but it wears off once he jumps. A bit weird to land but does good enough damage.

A few confirms and tick grabs are going to be here...

j.P/j.K > Throw (remember to do a short pause before throwing)

(This can work on block or hit) Crossup j.2P > PKK > (slight pause) FAB (yes, the range is that ridiculous.)