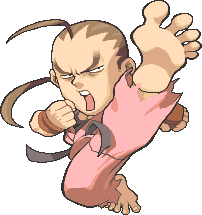 (Special Thanks to Josué M. From the Gem Fighter discord for providing pretty much all the info)

Dan is a joke character that was made to make fun of SNK's Ryo and Robert from Art of Fighting. In this game, Dan feels he needs to teach his Saikyou Style to the world, and to do that he must get students first, so he searches for Sakura. After finding her, Sakura says she'll accept being taught the martial art if Dan wins against her. After winning, Dan teaches Sakura the pathetic fighting style, 3 days later he receives a letter from Sakura, saying that she has both mastered and decided to unlearn the Saikyou Style due to how "stupid" it looks and how useless it is in a fight.

Dan is a character that needs the player to always try to make the situation in his advantage, via pissing the opponent off with taunts or using the correct combo strings depending on how the opponent acts. Dan lacks options from afar, so always try to get an item. Dan also starts with the "Banana item", if it hits the ground, a banana will be placed. If the opponent walks towards it, he will get launched then knocked down.

- His supers are either very bad or just worse than average

- Normals are either decent or worse than average

-Has almost no combo routes for damage

- Gets worse as he levels up lmao

Dan uses his "Saikyou Style" for fights, inferior version of the shoto's Ansatsuken.

5K - A high kick. Pretty good anti air. Launches opponents in the air to the other side of the screen.

S attacks Dan uses his father and a sign as a weapon to attack. It is unblockable and can be charged for more damage.

5S - Standard S move. You can use this on oki to catch blocking opponents off guard if they aren't quick enough to parry it on wakeup as a form of UB okizeme, or just to throw them out when they're conditioned to block.

4S/6S - Same as Ryu's 4S/6S, only a bit slower and with a different sign. It has more horizontal range than 5S. It's a safer oki option and that's what you use for the reasons listed above if you want greater range than 5S.

2S - A decent anti air. Since it's UB, it's your better anti air. Keep in mind it's a bit slow and should be used with caution.

j.P - Punch air to air. Links into every normal except 3K. j.K - The better air to air. Doesn't link into 3P neither 3K.

66P/d.P - Dan trips and hits his opponent, then taunts them if it hits. Launches on hit and it's EXTREMELY minus on block. Usually you shouldn't use this, but you can punish a few projectiles if your timing is just right.

3P - Dan taunts and hits the opponent. It's a decent anti-air and hits mid. 3K - A sweep, not much use for it other than throwing it out and getting some oki since it doesn't really link out of anything.

Taunts Dan's taunts can make him get meter with ease and pisses off the opponent. Can leave you open for attacks, though.

Start - The classic Dan taunt that makes him scream "OYAJI!". Can get a few from it.

2Start - The fastest taunt that gets a bit of meter. Great for meter build.

Combo strings Doing P and K in order makes Dan do different moves, showing his love for music and his loud side.

PPPP - Basic combo string that can launches on the final hit. The final hit can be avoided by blocking, useful to catch opponents conditioned to parry (read below)

PPKK - A combo that ends with Dan using 5S. Can be avoided only by parrying or stuffing it out as it is UB. THE THIRD HIT CANNOT COMBO. Useful if the opponent is conditioned to parrying.

PKPP - A combo that ends with a grab that can stun opponents. You can quickly do 623 + P right after or attempt to do a Jun Koku Satsu for more damage. Can be evicted by jumping or stuffing it out. THE THIRD HIT CAN'T COMBO. Useful if the opponent is conditioned to block or parry, but it's heavily telegraphed.

PKKK - Dan becomes Elvis and knockdowns his opponent. The final hit can be avoided by blocking. Useful if your opponent is conditioned to parrying.

Yellow gem: 623 + P(Kouryuuken) - Your Dragon Punch, now with more vertical range. Level 2 and 3 increases hits, gives it more vertical distance and makes Dan go foward a bit more. Best to use level 1 for combos. There's a chance Dan can flash and have iframes while doing this move.

Blue gem: 214 + K(Dankuu Kyaku) - Unlike the Tatsus, Dan does a few hits while throwing him foward in the air, doing a few kicks that can knockdown. Level 1 does 2 hits, level 2 does 3 and level 3 does 3 as well, 2 kicks then a Kouryuuken. Ironic enough, it's the worst version of this move, as the Kouryuuken can whiff if you don't position it right, and is extremely punishable when it whiffs or gets blocked.

Supers Dan's unfinished training with Gouken and creation of the "Saikyou Style" shows the inferior version of the "Ansatsuken".

6321441236 + S(Hisshou Burai Ken) - CONSOLE VERSIONS ONLY. Dan sends a barrage of attacks and ends with a Koryuu Ken. If you whiff or the opponent blocks, you'll get punished with ease.

6321441236 + P/41236 + S(Oyaji Blast) - Fullscreen super. Better used to punish other projectiles from afar. Sadly, IT DOES NOT DESTROY OTHER PROJECTILES. You can use this after your opponent gets blocked for some mean damage.

PP6KS/63214 + S(Jun Koku Satsu) - Like Akuma's Shun Goku Satsu/Raging Demon, it does more damage if you input it manually. Best used after the PKPP combo string. And uses 3 meter bars.

236236 + Start(Chouhatsu Densetsu) - The classic taunt super, now visually better than ever. Obviously useless, as you cannot cancel it into anything else like in USF4. Use it if you REALLY want to humiliate your opponent.

As Dan, since your special moves suck so bad, you'll be doing confirms into super most of the time. (Use K versions for confirms as they deal more damage unless specified otherwise)

It's mostly best to use the level 1 versions of the special moves mentioned above as they get worse and more punishable if they are leveled up too much.