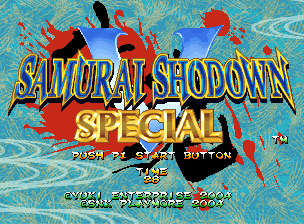 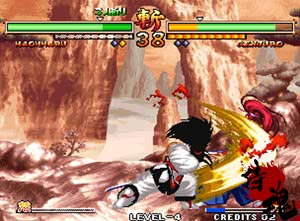 Activating the "Rage Explosion" allows you to use invincible attacks that blow back an enemy attack even if you are taking damage, and it shoots the sword gauge up to MAX in an instant. Time your use of this right because once it's activated, the Rage Gauge disappears for the rest of the match.

By meditating you can lower your rage meter while raising your meditate meter. The meditate meter is integrated with the life bar, look for the small arrow on top of it. When you have lost one match and your life meter is down past the arrow it will turn blue and allow you to activate Circumstance of Nothing (a slow motion state) by pressing BCD together. In this state you can perform an Issen move by again pressing BCD. Use only in need because your rage meter will be removed for the rest of the match.

Exclusive to Samurai Shodown 5 Special is the return of the Fatality system from Samurai Shodown 4. Your character will perform a violent and stylish finishing move that kills the enemy.

Overkills have the following properties -Makes the character dash forward -Has full startup invincibility -Can be blocked, but has throw properties -A successful connect means instant death for the opponent, no matter how much health they had remaining