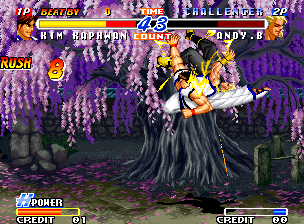 It's a good idea before you begin, you view the How to Play so you know the basic controls for the game. This is the first step to learning how to play, so pay good attention!

Up = Makes your character jump.

Down = Makes your character crouch.

Before you start getting deeply into this game, it's a good idea to learn the basic aspects of the gameplay in Real Bout Fatal Fury 2. The following basic techniques all apply to fighting in the front line of the fighting field.

Forward Dash - Double tap forward. If you jump during a Forward Dash, you can jump further than you could normally.

Backward Dash - Double tap back. If you time this correctly, you can avoid projectiles and some attacks.

Small Jump - Simply tap the up direction and you will do a small jump. You can do a small backward and forward jump as well.

Blocking - Simply hold back while your opponent attacks, and you will defend yourself, taking no damage from basic attacks, and small amounts of damage from special and desperation moves. You can block aerial and high attacks from a standing block position. Also note that if you are blocking your opponent, you don't have to hold back to continue blocking, this makes countering with a Breakshot easier, along with switching to a low blocking position.

Low Blocking - Hold back and down together as your opponent attacks, and you will assume a crouching guard position. This is the only way to defend against low attacks. Aerial and most high attacks will hit you in this position.

Air Blocking - Hold back while you're jumping.

Crawl - While crouching, press forward and your character will slowly crawl forward in a crouched position.

Mid-Air Turn - Press the D button during a jump, your character will quickly turn around to face the other direction. Very useful when jumping over your opponents so you can quickly face them and attack or use a mid-air special move.

Feint - Every character has a fake-out move that is the start of an animation of a special or desperation move, but is cut short. These are usually used during chain combo's to cancel part of the animation and then quickly go into another attack to continue the combo with another chain. This allows the player to create some very advanced combo's that would normally be impossible. They are also useful for recovering faster after using a normal attack, so you can immediately make another movement.

Evasion Attack - Press A and B together, this attack will avoid an attacking opponent for a split second while you attack them.

Grapple/Throw - Press Forward or Back and C when you are very close to your opponent. Some characters may also have throws that can be performed in mid air.

Safe Fall - Simply press D before you hit the ground, and you'll safely recover. This does not work if you are thrown or hit by a Desperation/Super Desperation Move.

Pursue Attacks - Some characters may have moves that enable them to attack an opponent that has fallen onto the ground. All the more reason to take advantage of the Safe Fall maneuver when applicable.

Line Shift Recovery - Press Up and D together has you hit the ground, and you will roll into the back line. You must have H. Power or higher to do this.

Taunt - Press C and D together. Each character has a unique taunt, however taunting will leave you open, but you may cancel the taunt with any movements.

Break Shot - Also known as a Guard Cancel, certain special moves (and Desperation moves!) can be performed while in the guard position and break your opponents attack. You must be at H.Power or higher to do this, and it drains your power gauge a notch. Obviously you must have S.Power or higher to use a Desperation Move as a break shot.

While in the back line, you have quite a few manuvers you can perform, offensive and defensive. It's a good idea to learn to take advantage of both, because it can make a great deal of difference durring play. Note that some stages are only one line, but they may have hazards if you knock your opponent into the background that will cause extra damage.

Attacking (Front line) - You can attack an opponent that is in the back line by hitting D for a high attack and Down + D for a low attack. Some characters have special moves that can hit opponents in both lines, such has Terry's Round Wave.

Line Thrust Attack - Nearly every character can perform an attack that will force their opponent into the back line, allowing them to attack them again with a front line attack. If you are fighting on a one line stage, then this attack will knock your opponent into a background hazard, causing some more damage.

Line Shift Attack - Some characters such has Terry may have a move that enables them to hit an opponent while in the front line as they shift into the backline. These kind of moves can make for great offensive and defensive manuvers, but has with any line shift movement, use wisely.

Every character can chain certain basic attacks into a chain combo. These chain combo's differ from each character, but they essentially do pretty decent damage on their own. The true power behind these rely on being able to follow up these chain combo's with a special or desperation move that greatly increase their damage potential.

You can also knock your opponent into the background with some of these combo's, allowing you to do even more damage. Experiment and learn your characters chain combo's, then figure out how you can turn them into even more flashy combo's. 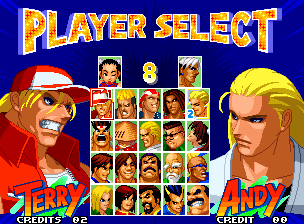