Fighter's History Dynamite (also known as Karnov's Revenge) is a fighting game created by the now-defunct company Data East and released in March 1994. It is the sequel to the infamous Fighter's History, which drew the legal wrath of Capcom during the mid-90s because of it's blatant rip-off design.

While the original game was made on Data East's own arcade system, the sequel was released for the Neo Geo with several improvements. Aside of new backgrounds and music the engine was re-tweaked so it became more combo-friendly and controls became more sleek. All nine characters return from the original game, while also making two bosses playable and introducing two newcomers. Although the game never achieved mainstream success, it maintains the cult status following to this day.

Being on the NeoGeo, this game only has 4 buttons, but doesn't follow traditional SNK fighting game layout.

to perform a fairly quick hop backwards to retreat. It doesn't grants invulnerability, but makes character airborne for it's whole duration. Backdash lasts 12 frames (or 13 frames for Ryoko, Jean, Mars and Zazie).

(some characters also have additional throws with

). Regular throws can not be softened or escaped in any way. As in the old SF2's, throws can be performed on reversal frame on wakeup if the opponent is close enough. Throwboxes in this game are all the same for all characters and they are ridiculously big. They're even extends to the characters' backs and this allows to do throws from your spine (actually CPUs in this game using it constantly).

Clown and Samchay have hold throws in which you can do more damage during the grab by mashing the joystick/buttons. The opponent can also counter-mash and break out faster. Clown can do over 25% damage with enough mashing, giving him the best normal throw in the game.

Ray, Jean, and Ryoko have air throws. Air throws do slightly more damage than regular throws, but generally aren't seen too often in play. Unlike normal ground throws, aerial ones have different throwboxes and so different ranges.

Marstorius and Ryoko have command throws. Some can be done with

and some can be done with

. The last one looks odd at first glance, but it's doable. Unlike regular throws, special throws can actually be comboed out of regular attack if you're in range. Special throws have no whiff animation - if you buffer into a special throw off a blocked normal attack, you will instantly interrupt the animation of the previous normal attack with another normal attack (the button you just hit). You can continually repeat this as long as your attacks are in range, creating a blocked hit string to keep the pressure on the opponent. For this reason it's usually best to stick to performing Marstorius' and Ryoko's special throws with

, so you don't cancel into a

Dizzies work differently from most other games. Each character has a unique piece of clothing on their body, which is damaged when hit, indicated by the object flashing. Once the object takes three hits it will fall off and the character will become dizzy. You can only lose the item once per round, so there's no fear of multiple dizzies or re-dizzies. Clothing is positioned in different places depending on the character, so some characters (depending on their attacks) will have an easier time dizzying certain other characters. When character gets dizzied, player can mash to get out of it faster. But unlike other FGs getting rid of dizzy is hard in this game. Even with really hard mashing character will be vulnerable for at least ~1.5 seconds and opponent will have a time to prepare his best combo. Therefore after a character has been dizzied, any further attacks to that character's weak spot will deal 1.5x damage for the rest of the round. Thus, for the many of times getting dizzied can mean a round loss.

Each character's weak point will be listed in their individual section.

A popular misconception is that there are super moves in the game, which is not true. Some characters DO have secret moves which can be performed at any time, but they're only considered secret in the sense that they did not show up on movelists distributed with the game and CPUs doesn't use them. The secret moves tend to have input motions that aren't as "obvious" to discover as other moves.

After blocking an attack, you're automatically able to block every following attack automatically as long as you're still in the original blockstun. So you can hold Back to block a jumping attack, and if they do any low attacks afterward you can automatically block them even if you remain in high block. Once blockstun has ended, you must then block the next move in the correct direction.

When in either blockstun or hitstun, it's possible to switch from a standing to crouching position (and vice versa) between hits of your opponent's combo or block string. You might think it would be better to always go into crouching position once you are being hit, as going into crouch could make some high attacks whiff. But there is a very important additional factor in play in this game - when you go into a crouching position, it changes the hitbox for your weak spot too. Attacks that might not have hit your weak spot when you were standing could very well register when you're crouching instead!

Example: if Ray does his Thunder Dynamite Tackle against a crouching Karnov, three hits will register on his weak point and dizzy him instantly! But, if Karnov remains standing, none of the hits will connect against his weak point and he will not be dizzied. It's very important to learn how your character's hitbox changes in crouch - don't assume it's always a good idea to hold Down-Back once a combo starts!

Charge time for the majority of charge-based special moves are very short - 40 frames, roughly two-thirds of a second. Some moves require double the charge time, however. They are:

Charge buffering exists in this game too. Instead of doing a move as just Charge

+ Button, you can instead do it as Charge

+ Button. This allows you to immediately start charging immediately after the move is performed. You can also substitute the last press of

as well. You can even charge immediately after a flash-kick type move by doing Charge

+ Button, but you have to be fast!

+ Button moves can be finished with

+ Button moves can be finished with

. Since you can also charge by holding

, this makes some charge moves even easier to do - you can perform the ones that require a

charge by simply starting the charge in

, and then slide the joystick to

and hit the button.

In the original FH even some easy combos on exposed weakpoint could lead to an inadequate damage. In a matter to fix this, FHD introduced two simple systems to scale down damage output, though in certain cases it doesn't really helps.

First one: when character is down to less than 20% health (not the same time the music speeds up, but a little after that), all damage from every type of attack is reduced by 50%. This makes it harder to kill with a chain combo that isn't cancelled into a special move near the end of the round. The best visual clue to see the threshold is character's name under the healthbar, look at the three letters that are closer to the timer.

Second one: also FHD includes a damage scaling system for combos, but it's rules are confusing at first. The game have two separate scaling systems for normals and special moves. Each of these have their own scaling values:

Two separate systems like these also means that they works independently from each other. That fact leads to damage outputs like these:

FHD does have differences between Player 1 and Player 2, though it's not uniqe for earlier Neo Geo titles. Detecting all specific differences is hard, here's a list of known ones:

Due to such differences, players on tournaments tends to use coin flip or rock-paper-scissors to determine who can choose the side.

A very loose ground combo system is in place. Every character has at least one light attack that can be chained into itself or other light attacks, or you can chain into a hard attack. Most combos consist of an optional jumping attack followed by a couple light attacks, chained into a hard attack, buffered into a special move. Nearly every normal move is bufferable into special moves too, with the exception of some command normals (such as Samchay's f.HP or f.HK). There is no juggle system. 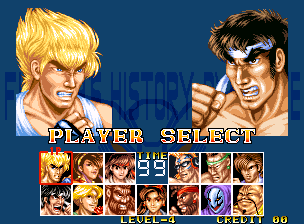 Fighter's History Dynamite provides a choice of 13 characters. 9 of them are the returning cast from the infamous original Fighter's History, that is known for it's blatant poor-developed rip-off characters from Street Fighter II (well, not all but most of them). Those are Ray, wandering American brawler; Feilin, Chinese actress; Ryoko, 17 year-old judo prodigy; Matlok, British punker; Samchay, Mui-Thai boxer from Thailand; Lee, Chinese Bājíquán specialist; Mizoguchi, high-school dropout who practicing Jissen Karate;Jean, French professional gymnast; and Marstorius, pro wrestler from Italy. Other 2 characters are Clown, a circus acrobat; and Karnov, the almighty fighter from Russia and the host of the "Great Grapple" tournament. They are returning bosses from the previous game, this time they're became playable. And final 2 characters are the newcomers - Yungmie, Korean Taekwondo master; and Zazie, the man from African Nature Protection Society who practices Karate. These two are at least a step forward in design, thus ended up to be more original characters.

All in all, the cast got some variety and can be entertaining, if you combine characters' new moves, overhauled engine and many janks with crazy stuff that was brought with it.

A universally-agreed upon tier list for this game is impossible to come up with, since it seems as if every player has differing opinions on where the characters fall in the tiers.

The placement of Marstorius in the tiers is one that there are rarely agreements on - some think he could be as high as Upper-Mid, others think he's much lower (one Japanese tier listing had him ranked as dead last). He has some very tough matchups and it can be hard for him to get in on characters with projectiles, but once he gets in he has a nasty mixup game that can easily win him the round. So he's a bit of a wildcard since a lot of his matches can go either way.

Don't treat any tier list as gospel, as practically every character has something going for them and can be competitive against most of the rest of the cast. This is also due in part to the game's dizzy system, since they can happen in an instant and turn the match around.

Here's some other examples: 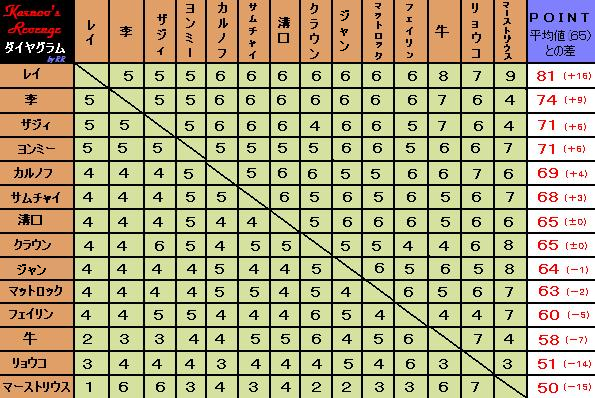 This one is really debatable but here it is: