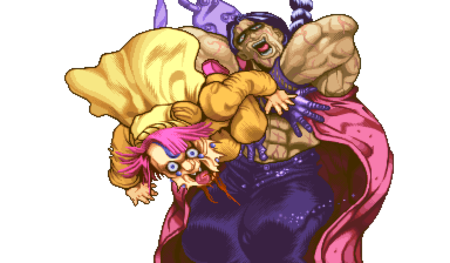 Devo the Cursed (呪いのデーボ Noroi no Dēbo), also known as Debo or D'bo, is a minor antagonist featured in Stardust Crusaders.

An infamous Native American shaman and assassin in DIO's service, Devo ambushes Jean Pierre Polnareff in his hotel room in Singapore. His Stand, Ebony Devil, has the power to possess inanimate objects, but only after Devo himself was hurt, growing in strength as Devo grows more hatred to his opponent. This allows him to remotely control them from any distance.

If you're a fan of characters with the "Puppet Archetype" like Zato from Guilty Gear, or Carl Clover from Blazblue then Devo is the character for you. Devo has a unique mechanic in which he always stays on remote everytime he turns his stand on. He also has a niche mechanic in which his stand can walk along the wall and the ceiling but unfortunately his has little to no uses in a real match. Devo also doesn't recieve any I-Frames every time he transitions to Stand Off. He is also the guy who innovated the "Puppet Archetype" which brought life to alotta characters like Millia, Zato, Carl, Menat, etc. Devo's gameplay relies on heavy ass neutral and ground control with the puppet. Devo would usually give you a bad time when his stand is behind you and at the same time Devo himself is close to you as he can do full on Gangbang with his doll and result in creating combos that could break the combo meter and kill the opponent, or just do big damage and set okizeme.