Occasionally people may use "Notation" and "Move" interchangeably.

Get connector information from ggacx

Here's the ranking, from the higher to the lower in terms of stamina (numbers are a very close approximation of the damage they can take, and are when their health bar are empty, but they aren't KO yet):

A method of moving your character quickly over a short distance. You cannot block whilst you are dashing.

Every character have different speeds and moving distances. The bigger the "moving distance" number, the larger the distance they travel. Frames means how much time they need for a dash. For the speed of a dash, you should compare the moving distance with the frames from the different characters to see who is quicker than another.

Here's the information about the characters:

Similar to a regular jump, except that it carries you farther, and takes longer to start up.

Wake Up and Quick Stand

When falling to the ground, your character enters in a "Wake Up" state, and they will wake up at the character standard speed. However, you have the option to perform a "Quick Stand". A "Quick Stand" will make your character roll backwards into a standing position, and you will wake up faster than the character normal wake up. Extremely useful in avoiding wake-up games after you are knocked down, where you must guess in order to defend properly against an opponent's attack (i.e. high, low, throw). Do not quick stand in the corner, because your opponent may be able to dash through the roll and cross you up, making it extremely confusing to defend properly.

Note: You cannot quick stand after being knocked down by a super.

Every character wakes up at different speeds, this is also for "Quick Stand". All the information below are in frames, a higher number of frames means a slow wakeup, and a small number of frames, a faster wakeup.

Please note: Tiers are HIGHLY debatable so all lists should be taken with a grain of salt. If a character is only a place or two away from where they "should" be, please refrain from wildly editing this section. 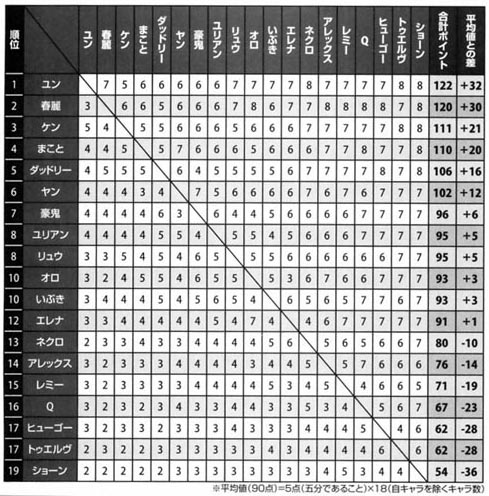 A tier list from Arcadia magazine, showing match-ups (Order is the same)

When considering a tournament, with a large number of competitors, you find that there is invariably more people playing the higher tier characters. Almost to the point where very few (if any) lower tiers appear.

As such, it is sometimes improper to base a Top level tournament tier list on ALL the match-ups. After taking a flat tier list, and selecting those characters with the highest frequency of appearance (In this case,...). By ranking every character by their match-ups against those n number of characters, you end up with a more tournament based tier-list.

This list, essentially, ranks characters on their ability to place in a large scale tournament.