Doom is a keepaway character with some sneaky ways to get in close and inflict damage. He has the best beam projectile in the game, and his fast startup Molecular Shield can really help keep would-be attackers off of him. His ability to {{#motion:airdashcancel}} many of his air normals gives him excellent mixups after blocked Dive Kicks, and his throws can lead to big damage combos. If a strong keepaway character with sneaky close range tricks is your style, join Doom's army.

Doom's health is slightly above average, weighing in at an admirable 1,000,000 hit points. His walk speed is the worst of all characters in the game bar Chris Redfield, Thor, Dormammu and Haggar, with all of whom he is tied. His damage output (average damage of all Doom's normals) is above average at 78,000, falling just short of the hard-hitters like Tron-Bonne and thus crowning him king of the middle division. Despite having quite a tall frame and posture, his hitbox is very average--again labelling him a very middle-of-the-road character. His poor speed is compensated for by an 8-way air dash (into and out of which almost all of his air normals can cancel) and a ground dash that can be cancelled into by most of his ground normals.

Doctor Doom's goal is to push an opponent into the corner. His corner combos/mixups are truly frightening when compared to his midscreen options. However, this isn't an easy task since you will have to deal with projectiles, rushdown, & your opponents' assists thrown your way. You will have to make use of his zoning moves, normals, throws, dash-cancels, jump-cancels into airdashes, & airdash cancels to push the opponent in the corner.

Overall, his best moves are:

Air Plasma Beam {{#motion: L}} and/or {{#motion: H}}: Good for chip damage while trying to be unpredictable with your airdash-based offense.

Molecular Shield {{#motion: H}}: Although not as dominant as they were in MvC2, the rocks are still useful. They have faster startup than Plasma Beam. Plus, the shield sends out 4 rocks towards the opponent, so you can forge ahead.

Super-Jump Forward Photon Shot {{#motion: L}}: A very good way to start your air offense. You can airdash down-forward after the beams hit the opponent.

Foot Dive: Amazing move and the staple to Doom's goal. The move has good priority and it excels when combined with dash-cancels & jump-cancels. Combine this with a lockdown assist and you can add a lot of pressure. After a blocked Foot Dive, you can air-dash forward with air {{#motion: M}} or air-dash down-forward and do a mixup of tri-jump cr. {{#motion: L}}, instant air dash {{#motion: M}}, or throw. You can also throw out air Plasma Beams, Photon Shots, or go into Flight after a blocked Foot Dive. You can cancel a Foot Dive midway into an air Photon Shot, air Plasma Beam, or Flight.

Airdash {{#motion: M}}: Another staple to Doom's goal. It hits twice and must be blocked high. The move does come out decently quick if you do it, instant-overhead style. If you have a low-hitting assist (i.e. Wesker Samurai Edge), then you can do unblockables.

Hard Kick: A good anti-air and also another launcher. The move also has good priority.

Hidden Missiles: The move is still useful. Just throw out at most 2-3 missiles. Even one missile can change the course of a match.

Air {{#motion: H}}: Good for mid-range annoyance and if you want to mix up your air options. Decent at stopping jump-in attempts by your opponent.

Be sure to learn his loops. There are two midscreen loops worth learning: the Buktooth loop (http://www.youtube.com/watch?v=oN0Wg2xbfSM) & another loop which consists of foot-dives, which looks to be MUCH better (but a bit more difficult to perform) in pushing someone to the corner. The 2nd loop is:

Doom's options are very varied. Experiment to see what works and you may find the character very rewarding. Once you get the opponent in the corner, Doom may prove to be a fun and valuable asset on your team. 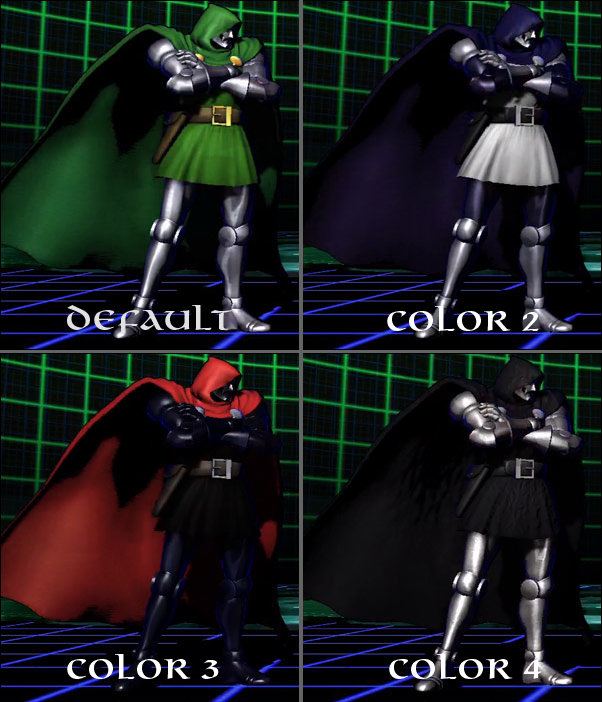