Advanced V.G. 2 (short for "Variable Geo") is an all-women's fighting game developed by TGL and released on the PSX in 1998. It is the sequel to the first Advanced V.G., released on PC-Engine in 1994 (and ported to various consoles later), which was itself a reboot to the original Variable Geo, released on PC-98 in 1993. Despite its rough start, the series has come a long way, and with AVG2, TGL delivered a solid, playable and fun fighting game. It is worth noting that for a series known for its pervy origins, this game is very light on fanservice and so has no H-scenes at all.

Perhaps in spite of appearances, AVG2 doesn't play like a typical "anime" game, instead being more comparable to a mid-90s Capcom or SNK game. Mechanically, the game is closer to something like Real Bout Fatal Fury than Guilty Gear. If you like a fast and dynamic ground game, high damage combos and 90s anime girls, this game just might be for you.

This tier list is an approximation based on Negi's AVG2 tier chart. With the exception of a couple of outliers, AVG2 is a surprisingly well-balanced game, and most characters are capable of holding their own and winning tournaments. 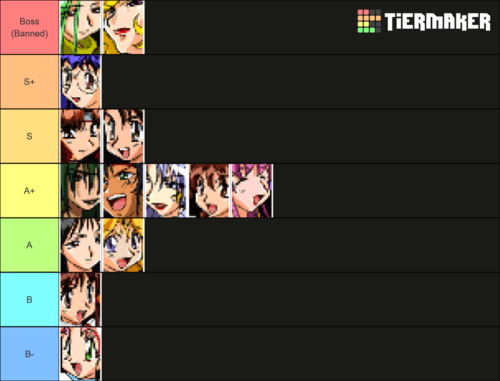 Material and Miranda are the hidden boss characters of the game, with Material serving as the mid-boss, and Miranda as the final boss. Both characters are banned in competitive play, but they can be good for a laugh, so if you want to mess around with them, unlocking them is a pretty simple affair.
First, you must complete Story Mode, which will unlock Material. Then, completing Normal Mode will unlock Miranda. You must unlock the two characters in that order -- which is to say, having Material unlocked is a prerequisite for unlocking Miranda.

Alternatively, if you plan to play on an emulator, save yourself the hassle and download a save file from GameFAQS here.

Every character can perform their st.HP out of a forward dash (st.HK instead if you're Ayako), though some characters have a command normal on the dash HP input.
Characters may also press back to cut their forward dash short, stopping them in place. However, this option is not available to Satomi, Manami, Ayako or Kaori -- these four must commit to their dashes (though they can still perform their dash normals).

Backdashes only have throw invincibility usually, but some have lower-body invincibility as well.
Note: Tamao and Material can cancel their backdashes by pressing forward.

Super jumps cause characters to jump higher and twice the distance of a normal jump -- this is usually your main option for covering large distances. A very common offensive tactic is to super jump with rising jump light normals, as they stay active for a fairly long time and can be chained into jump heavy normals. It's also possible to perform a super jump from a dash just by dashing and then inputting a jump, although Ayako, Elirin, Manami and Material cannot do this.

Obviously, this game allows you to block. Something to note is that blockstun on attacks in AVG2 is quite short -- usually about 5-6F shorter than hitstun, which gives you plenty of opportunities to find your way out of pressure if you know what you're doing.

Characters are able to block aerial attacks and projectiles while in the air themselves. However, it is impossible to air block grounded attacks, such as anti-air normals.

Guard cancels in AVG2 work very similarly to Alpha Counters, though there are some notable differences worth paying attention to.
Firstly, guard cancels do not provide any invulnerability, so you need to be a bit more judicious with your guard cancels than you would be in a game like Alpha 2. Secondly, characters are able to guard cancel with each of the four normal attack buttons, and each button has a unique animation -- some actually have more than one guard cancel per button, depending on factors such as whether you're standing or crouching, or if you hold forward during the freeze frames.

Similar to throw softening in ST and Alpha 2, halving the damage of any throw you receive and putting yourself into an air reset state instead of being knocked down. Bear in mind, however, that air reset state isn't invulnerable, so depending on the throw soften animation, some characters are able to punish you for softening the throw, which can be worth more damage than the throw itself in some cases. That is, assuming you even manage to hit the throw soften in the first place -- unlike ST/A2, the throw soften input window in this game is only 1F, so it really only becomes a factor when two players go for a throw at the same time.

A note on special move motions

Special move motions throughout this wiki will be notated using "qcf", "dp", etc. However, Advanced VG2 doesn't require diagonal inputs to be registered in order for a special move input to be valid. This effectively means that a qcf input only requires the d and f inputs to be valid. You'll need to work around this in order to prevent accidental special moves in some cases, but you can also use this to your advantage to make certain super cancels easier.

The power gauge is your super meter. It holds up to three stocks and is built in several ways, with some building more than others. Actions that build the most meter to the least meter are as follows:
Taking damage > dealing damage > blocking attacks > having your attacks blocked > whiffing attacks
In general, taking damage builds more meter than dealing it, which makes the super meter your pseudo-comeback mechanic.

Super meter is spent primarily on EX Special Moves, which cost one stock, and Super Attacks, which cost two stocks.

This distinction is important, because super cancelling is only possible with double input EX attacks -- in other words, you can't use the two-button EX commands to super cancel. The game just won't let it happen.

Many characters also has a special version of one special move each (marked as "SECRET") which borrows some property of the EX version of that special move and applies it to the meterless version. These special moves are only available if you have less than 1 meter stocked, and are generally more of a fun easter egg than an actual useful move that you need to care about.

A large number of characters in AVG2 have EX special moves or Supers that, given they're in the correct range, will hit instantly after superflash, similarly to Valle CCs in Alpha 2 or 0F Supers in Garou MOTW. This means that if you were not blocking before the superflash, you won't be able to block the attack once superflash ends. You can, however, input reversals during superflash (with one exception). 0F unblockables are fairly important to the game, as they provide significant utility on both defense and offense, so learning to play around them is equally important. The following is a list of characters who have instant supers:

Jun, Manami and Miranda do not have 0F unblockables. Well, Jun still has her command grab super, but that's technically a different thing.

Characters' defense in this game can be classified within six distinct tiers, with higher tiers taking less damage. All characters within a tier take the same damage.

Characters get back on their feet at their own speed.

A number of characters have command normals that launch the opponent for a combo. Unlike similar moves in other games, these normals cannot be jump-cancelled, so follow-ups usually involve either manually timing a jump or super-jump, or simply juggling with grounded attacks.

Characters can be hit off the ground by any attack while knocked down, so long as the attack has an appropriately low hitbox. After being hit OTG, the opponent will be floated a small distance into the air, where they can be hit with attacks until they hit the ground again. Attacks that land on an opponent in this situation will cause a knockdown rather than an air reset.

OTGs and throws scale damage by 50%.

How to Play Online

nullDC BEAR now supports Mednafen, meaning you can now use it to play PSX games online, including AVG2. Join this Discord channel if you want to organise games, and make sure you have Radmin VPN installed so you can join the relevant network.

There are two versions of the game: the original 1998 release (SLPS-01318) and the 2003 SuperLite 1500 series re-release (SLPM-87226). As far as difference goes, they're pretty much identical besides the SuperLite logo screen in the re-release.

The game version released in the Japanese PS Store (for PS3, PSP and Vita) is the original release, SLPS-01318. It's a PS1 Classic, so it has no built-in netplay.